Start a Wiki
Grace Madeleine "Gracie" le Chateau is one Angelina's best friends (sometimes rival.) She is one of the main characters of Hit Entertainment's Angelina Ballerina: The Next Steps and one of the nine tritagonists of HIt Entertainment films, Angelina Ballerina: The First Movie, Angelina in the Haunted Mansion, Angelina's New Friend and A Big Day at the Fair. Her catchphrase is "I can do it perfectly!" She speaks with a French accent and was voiced by Jo Wyatt. She is 10 years old and is from Paris, France.

Gracie is meticulous and a tad self-absorbed and has shown to be a teacher's pet in order to get Mrs. Mimi's attention. Like Angelina, Gracie loves being the star of the show, but often uses those occasions to brag. Nonetheless, Angelina knows Gracie is a very kind hearted friend and the competition keeps Angelina on her toes. She wants everyone to go her way, as shown in many episodes, that she wants others to do her favorite dance, the Cheddar Cheese Slide!

Gracie is a tan mouseling, and she wears a yellow dress, with a wraparound neckline, which is blue. The skirt attached to the dress is a brighter yellow, and seems to be made of netting inside. She wears blue ballet flats. She wears a blue headband, with a yellow flower at the side of the headband.

Gracie has a passion for dance, especially modern dance, tap dance, and disco dance, as she saw in an old movie. But sometimes, her passion can get in the way of teamworks, and other work, as shown in many episodes. 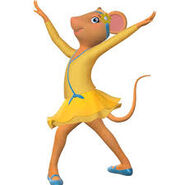 Add a photo to this gallery
Retrieved from "https://angelina-ballerina-the-next-steps.fandom.com/wiki/Gracie?oldid=6897"
Community content is available under CC-BY-SA unless otherwise noted.